There’s a little hippie-run health food place in town I eat at all the time, and my love for their veggie burger inspired me to try and make one of my own. I initially considered asking for their recipe but a) It felt kind of cheesy being all, “Hey, tell me exactly how to make your food so I can do it at home without having to tip anyone or pretend to enjoy  hearing didgeridoo duets during my lunch!” and b) the amount of tie-dye clothing for sale in this place leads me to believe that their recipe would have included, like, bread crumbs brushed with patchouli oil and baked on a stone hearth at the summer solstice, and frankly I’m much too busy tanning dried tofu for my homemade vegan Birkenstocks to take on such endeavors.

Instead, I Googled the shit out of veggie burger recipes and decided to combine the parts I liked from each recipe into one delicious, healthy burger. The ones I made included:

I 16-oz. can of black beans, drained and rinsed
1 ear of corn
Half a bell pepper
Half a jalapeno
Half a white onion
3 cloves of garlic
1 tablespoon cumin
1 teaspoon chili sauce
1 egg
1/2 cup breadcrumbs
Buns
(I didn’t think to add cilantro, but I think it would be an excellent addition)

Preheat the oven to 375. (I’m telling you this now because I HATE when recipes wait until the end of the instructions to tell you what the oven temp needs to be set at. Waiting until you’re done prepping your food to heat up the oven is like waiting until the end of Center Stage to start drinking every time Jodie Sawyer bites her lip and makes a relationship decision so dumb that even her legwarmers judge her. Why would you NOT do it, is what I’m saying.)

After you drain and rinse the beans, mash them with a fork until they look like the contents of an infant’s Huggies after a bout of vein-popping diarrhea: 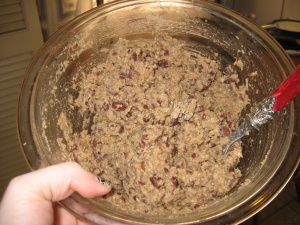 A fun party trick* is to make this in advance and store the mixture in a diaper, which you then pull out of the fridge in front of your guests to form their burgers. *Not really.

Put the corn kernels, bell pepper, jalapeno, onion and garlic into a food processor and chop. I got a bit carried away with the Magic Bullet, and ended up pureeing the vegetables. I do not recommend this, as I had to add about 12 loaves worth of breadcrumbs to make these into patties, which I’m pretty sure negates any health factor these may have had going for them. Also, the veggie puree was so shockingly green that when I poured it into the bowl with the beans it looked like the Grinch vomited into a diaper. I was too busy feeling like a failure to photograph this stage, but here’s a shot of the veggies pre-puree: 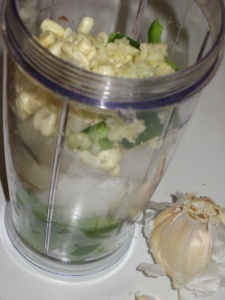 About to be massacred.

In a bowl, whisk together the egg, cumin and chili sauce, and then pour this mixture into the bowl of poopy Grinch barf. Add the breadcrumbs and then form into patties. Place the patties onto a lightly greased cookie sheet and bake at 375 degrees for 10-15 minutes on each side. You can also grill these if you have a barbecue and the skills necessary to operate it. I have neither. 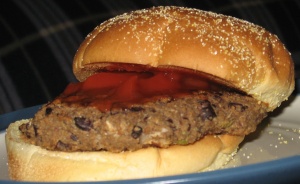 These turned out pretty tasty, but I couldn’t fully enjoy myself because I kept catching myself straining to hear the sound of a bitchin’ didgeridooist (Didgeridooer? What the hell is a didgeridoo player called?) piping away in the background while I ate. Turns out those loveable hippies may be onto something.

HeatherHomefaker occasionally contains paid advertising in the form of affiliate links and product reviews. Please know that I always share my honest opinion and experiences, and will always clearly identify if a post is sponsored in any way. Thank you for your support!